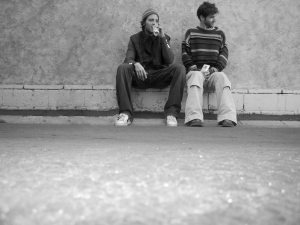 RadGo
Thursday, 29 August 2013
By Mike English
If you scratch around enough, you can find true rock ‘n’ roll beneath the surface of the spoon-fed drivel of popular music shoveled to the masses by the corporate mind bandits. It’s been there all along, rock ‘n’ roll has, and it even continues to thrive, haunting poorly lit clubs in dusty cities where you can still buy cold cans of cheap beer. RadGo, a street-dog blend of dirty blues rock, will send you home at night with that satisfying ringing in your ears that is the precursor to deafness in your later years.

Comprised of rhythm and blues despots Miguel el Rad and Carlos del Coghill, RadGo keeps it simple, relying only on drums, guitar and vocals to create their rocketdog-rock sound. Del Coghill takes on the responsibilities of both drums and vocals, while el Rad stops one step short of playing his guitar with his tongue and lighting it afire onstage. That’s the attitude, anyway. Think straightforward, unadorned and hard core. RadGo has been putting out a steady stream of music since 2007, and original tunes like “Own It” and “Howl” capture the post-punk spirit. Raven Chacon opens. Deer antlers might be played as a musical instrument.